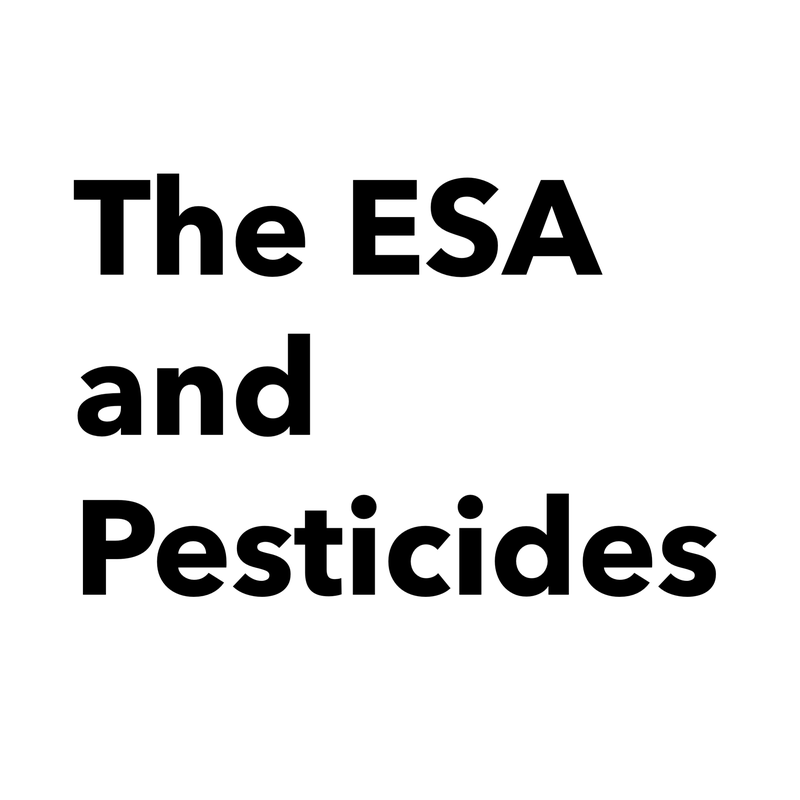 Defenders of Wildlife and CropLife America co-hosted this workshop, with the group RESOLVE serving as conveners. The following is from RESOLVE’s summary of the workshop.

On Tuesday, August 31, 2021 representatives from federal government agencies, including Environmental Protection Agency (EPA), US Fish and Wildlife Service (FWS), National Marine Fisheries Service (NMFS), and US Department of Agriculture (USDA); private sector, including growers and pesticide registrants; and environmental advocacy organizations gathered virtually to collaboratively problem-solve identified areas of mutual interest and potential change related to the use and regulation of agricultural pesticides in the context of the ESA and FIFRA. Given the limitations of time for a one-day session, there was recognition that the discussion would not be able to cover the broad range of challenges and areas of primary interest for many of the participants engaged in navigating compliance with ESA and FIFRA while both protecting listed species and having licensed pesticides for agricultural uses.

A cross-section of workshop participants served on an Organizing Group to help shape the agenda and determine ground rules and protocols. They elected to focus on two main topics of interest for more specific solutions generation: 1) Improving/ensuring protection of threatened and endangered (or “listed”) species under the Endangered Species Act/in the context of ESA and FIFRA; and 2) identifying key elements of a successful ESA and FIFRA process or program.

Improving species protection was framed to focus on three species groupings, including anadromous fish, terrestrial invertebrates, and terrestrial flowering plants with animal pollinators/dispersers. These species groupings examples were selected to highlight an array of mitigation implementation challenges, each subject to one or more of the following variables: size and range of species habitat; species’ proximity to agricultural activity; species’ level of exposure to pesticides via different pathways; species’ designated level of imperilment; available data on given pesticide(s) and habitat(s); available data on given mitigation strategies’ impact on listed species, and the relative stage of the ESA and FIFRA process at which implementation occurs.

Key elements of a successful process began to emerge during the discussion of the first topic on improving species protection and was expanded upon in short break out group discussions, and then as a full group. Interested in carrying these elements forward, the group expressed support for a pilot initiative that employs new methods to achieve upfront species protection and incorporates desirable program elements. The pilot would offer an opportunity to test new strategies, learn from an alternative approach, and build a foundation for future efforts to eventually improve the overall ESA and FIFRA process.

The pilot would seek to account for upfront mitigation strategies in a more efficient and streamlined process that does not replace formal consultation but offers a means of initiating conservation effort on the most vulnerable and/or imperiled species. Additionally, the pilot design could consider a range of complexity of agricultural activity and species overlap, therefore requiring the selection or development of a suite of validated mitigation strategies.

While some discussion took place on the pilot’s envisioned scope and scale, there was not time to pinpoint specific criteria. The federal agencies involved (i.e., EPA, FWS, NMFS, and USDA) may take the lead with the next steps of a pilot, specifically the number and variety of species to be included in a preliminary pilot. The Agencies may have the most informed view as to which species subset will be most beneficial to focus on for the pilot and which accelerated action would provide useful insights.

The workshop was adjourned with final comments by the co-hosts, CropLife America and Defenders of Wildlife.

During the workshop Environmental Protection Agency, US Fish and Wildlife Service, National Marine Fisheries Service, and US Department of Agriculture shared the following prepared, joint statement:

“The four federal agencies are pleased to see this first-ever workshop between environmental groups and the regulated community on improving the ESA-FIFRA process. We hope that the workshop is the first of many milestones in stakeholders working together on solutions to one of the most challenging ESA issues.

The federal agencies also want to send a consistent message about ESA-FIFRA mitigation opportunities that we seek to prioritize.

Overall, we want to work with stakeholders to frontload mitigation measures earlier in the FIFRA or ESA process, especially for species that face significant conservation risks from pesticides—for example, species that have previously received pesticide jeopardy findings and might again receive those findings in the future. We would also like to work with stakeholders to develop a set of standardized mitigation measures that provide registrants and users with flexibility in meeting section 7(a)(2) requirements.

Given that the ESA places a high priority on avoiding jeopardy/adverse modification, we recognize that we can work with registrants, growers, and other stakeholders to provide better, upfront information on the types and amount of mitigation that would reduce the likelihood of a J/AM situation. This isn’t to shortcut the formal consultation process; the Services would still make their normal J/AM findings, but those findings would consider the upfront mitigation. The goal is to create an easier process by which regulated entities and the agencies can identify mitigation measures before formal consultation, especially measures to address high conservation risk situations. We welcome a dialogue on this topic.

Finally, we welcome ideas on research projects that stakeholders might want to pursue to fill important knowledge gaps in pesticide consultations. Two broad areas for consideration are data on the effects of stressors and better information on the effect of mitigation measures for data-limited species, and better usage data.”