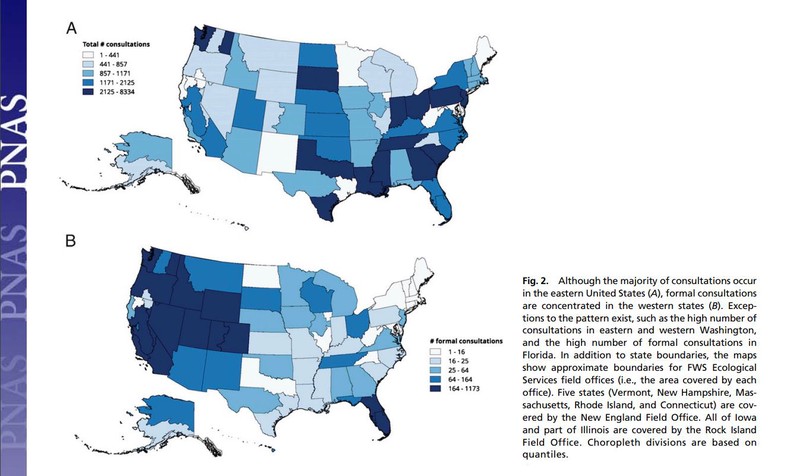 Separating myth and reality is essential for evaluating the effectiveness of laws. Section 7 of the US Endangered Species Act (Act) directs federal agencies to help conserve threatened and endangered species, including by consulting with the US Fish and Wildlife Service (FWS) or National Marine Fisheries Service on actions the agencies authorize, fund, or carry out. Consultations ensure that actions do not violate the Act’s prohibitions on “jeopardizing” listed species or “destroying or adversely modifying” these species’ critical habitat. Because these prohibitions are broad, many people consider section 7 the primary tool for protecting species under the Act, whereas others believe section 7 severely impedes economic development. This decades-old controversy is driven primarily by the lack of data on implementation: past analyses are either over 25 y old or taxonomically restricted. We analyze data on all 88,290 consultations recorded by FWS from January 2008 through April 2015. In contrast to conventional wisdom about section 7 implementation, no project was stopped or extensively altered as a result of FWS finding jeopardy or adverse modification during this period. We also show that median consultation duration is far lower than the maximum allowed by the Act, and several factors drive variation in consultation duration. The results discredit many of the claims about the onerous nature of section 7 but also raise questions as to how federal agencies could apply this tool more effectively to conserve species. We build on the results to identify ways to improve the effectiveness of consultations for imperiled species conservation and increase the efficiency of consultations.